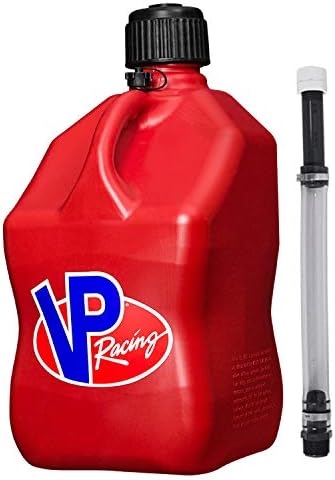 This is not a portable fuel container as described by ASTM, EPA, ARB, and other official agencies. For racing fuel only, such as Nitromethane or Methanol, used in sanctioned Motorsports. NOT for fuel used on highways. Also for storage and transport of feed, water, attractants, fluids and other outdoor products.

INTENDED USE: Intended for racing fuel such as Nitromethane or Methanol that are used in sanctioned motorsports; NOTE: This is not a portable fuel container as described by ASTM, EPA, ARB, and other official agencies
VERSATILE 5 GALLON JUG: VP Racing 5-Gallon capacity motorsport racing container can be used to store, carry, and disperse animal feed and attractants, water, and other outdoor products but should not be used as a portable fuel container
DURABLE CONSTRUCTION: Constructed of high-quality, virgin high-density polyethylene that undergoes a 15-point quality test to ensure it can tolerate the roughest treatment
HOSE INCLUDED: VP Racing 14-inch Deluxe Hose Kit for Motorsport or Sportsman Containers; Hose cap included; Forms a water-tight seal with the rubber gasket for secure pouring
POURS EASILY: Pours quickly and easily thanks to a contoured handle, bottom grip, non-breakable multipurpose cap, and rubber gaskets


There is love in sharing: