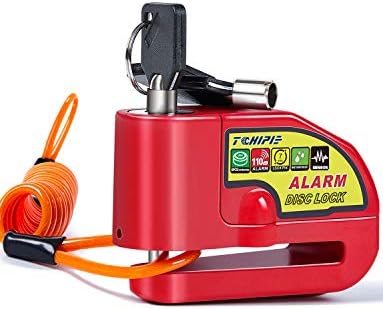 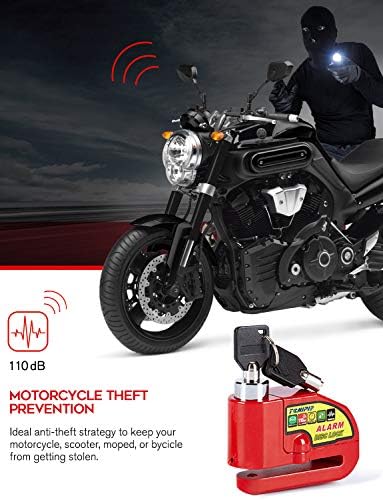 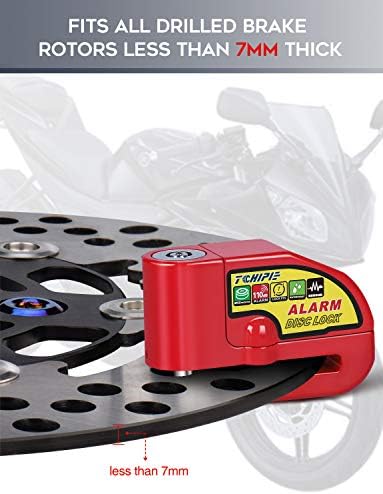 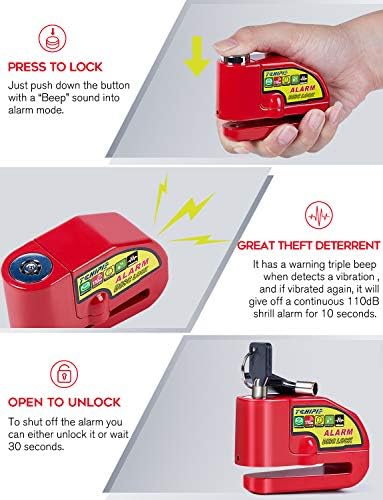 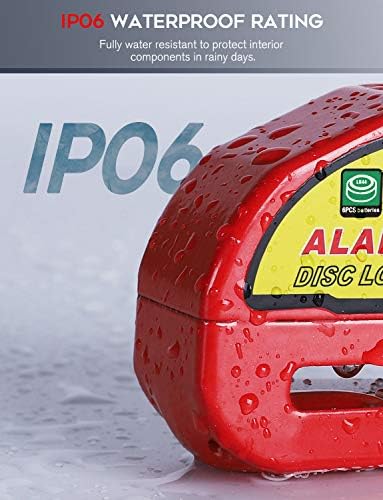 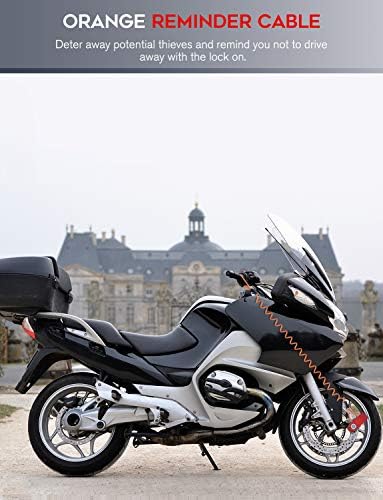 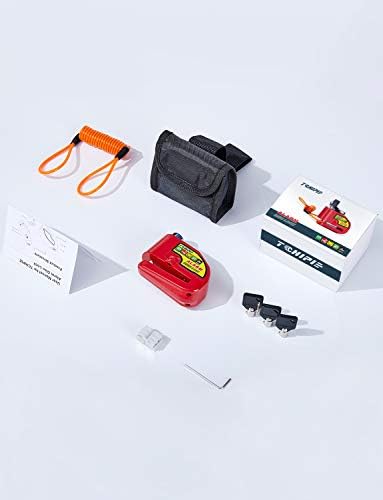 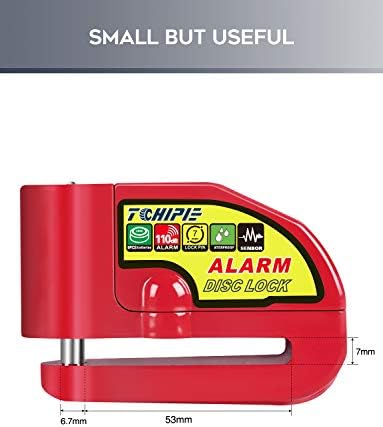 MOTORCYCLE LOCK WITH ALARM The TCHIPIE alarm disc lock is robust build to lock the wheel and the 110dB audible alarm is loud enough to scare anyone who attempts to steal your motorcycle or bike, making him feel like there’s a spot light on them. Can give you more security when leaving your motorcycle and prevent yourself from becoming a victim of motorcycle theft. DETERRENT BOTH AUDIBLY AND VISUALLY The red brake disc alarm along with the orange reminder cable itself is a great deterrent, letting the suspects know that it’s armed. The 110dB alarm sound is loud enough to draw attention and deter any “touchy” suspect, offering you the added ease of mind that your motorcycle is safe. It’s a must-have for motorcycle trips, motel stays, parking outside in a public parking spot, or if you have the need to lock up your kid’s bike until they get the homework done. EASY TO USE: 1. Press the button to lock, you’ll hear a loud “beep” sound to let you know that the lock alarm is activated. 2. When detecting a vibration it has a warning triple beep to let potential thieves know its armed. 3. Then if it’s tampered again it will give off a continuous shrill 10 beeps alarm to draw everyone’s attention and fight off the thieves suspects. 4. Each alarm will last for 10 seconds and has to be disabled by inserting the key to unlock it or wait for 10 seconds. BATTERY REPLACEMENT It’s time to change the battery when you hear a continuous “gee gee gee. . . ” sounds, or the alarm suddenly stops without lasting 10 times. 1. Use the Allen wrench to unscrew the 4 fixing screws and remove the cover. 2. Take out the battery set and put on the spare battery set, pay attention to the anode “+” and cathode “-“. 3. Close the cover and tighten the 4 screws. WHAT YOU GET 1x TCHIPIE alarm disc lock 1x 4ft reminder cable 1x Spare battery set 1x Carrying pouch 1x Allen wrench 1* Worry-free

▶【MOTORCYCLE THEFT PREVENTION】With built-in sensors detecting shocks and movements, the TCHIPIE anti-theft disk lock will keep your motorcycle safe, protected and theft-free as the audible alarm system will scare away suspects if they attempt it! According to NCIB 44, 268 motorcycles were reported stolen last year, it’s time to add additional security to your investment and prevent motorcycle theft from happening to you.
▶【AUDIBLE ALARM DETERRENT】Easy to lock with one-press operation, immediately the lock goes into alarm mode and you’ll hear a “Beep” sound. When detects a vibration, it has a warning triple “Beep” to let potential thieves know its armed. Then if it’s triggered again the alarm gives off a continuous shrill alarm for about 30 seconds, the 100dB is loud enough for anyone to notice. To shut off the alarm you will either have to unlock it or wait 30 seconds.
▶【FOR ROTORS 7MM THICK OR LESS】Fits the majority of the motorcycles and bikes with disc brakes, where the brake rotor is less than 7mm (1/4″) thick and cross drilled. Ideal active security device for most popular models: Harley Davidson, Yamaha FJR / YZF-R3 2017 / Raptor 700, 2017 Honda Grom, BMW G310R, 2017 Kawasaki Z125 / Kawasaki Ninja 250r 500r 650 2017 2012, 2016 Indian Scout Sixty, Suzuki GSX-R 600 / GSX-R1000, Triumph Bonneville Streets mat, Victory Cross-country, Honda shadow spirit, etc.
▶【HAVING PEACE OF MIND】The bright red color and orange reminder cable can act as a decent visual deterrent for those potential thieves. Can give you ease of mind leaving your bike or motorcycle outside in a populated city, in the parking lot at work, during motorcycle ride, trips, or motel travels.
▶【LONG TERM USE】This TCHIPIE motorcycle wheel lock with siren has an alloy aluminum body, sealed against moisture, dust and dirt. It comes with battery already installed and an extra 6pcs set for when those run out. You can use the Allen key to change the batteries in seconds, or just to remove the batteries and use without alarm as a conventional lock.
▶【BUY WITH CONFIDENCE】We always stand behind our product and back your purchase with 3-month money back and extended 24-month product no-worry !

There is love in sharing: